Updated predictions moving into the Finals are live

Had a great week in Columbus – and now we’re down to the final two. Our model likes Wisconsin over Nebraska 58/42

But personally…I think Nebraska is on a heater and they’re gonna take this thing tonight…we shall see.

Updated predictions moving into the Final Four are live

Moving into the final week – the model thinks whoever wins the semi-final between Louisville & Wisconsin will be crowned the National Champion on Saturday night.

We have Louisville / Wisconsin at a 50/50 split Thursday night. While we favor Nebraska over Pitt at 60/40.

Nebraska beating Texas last weekend boosted their likelihood of a National Championship by +21% compared to pre-tournament levels – meanwhile, the original favorite Longhorns took the biggest hit after having about a 1 in 4 chance to win a title at the outset of the tournament.

Looking forward to seeing some familiar faces in Columbus this week!

Updated predictions moving into the Elite Eight are live

Model really likes Louisville over GT (76% chance to win) mainly because our rankings put this as the #3 vs. #14 team in the latest ratings.

We’re also taking Wisconsin over Minnesota at a 69% chance, though we have this is our #2 ranking against #8.

Texas over Nebraska at a ~64% chance, but this is our #1 team against #6 so this should be a great, close battle.

Finally, Pitt and Purdue, we’re taking Pitt to win, but this is basically a toss-up at 53.7%.

Nebraska is up +14% in their chance at playing in the National Championship game – the largest increase our of any of the Elite Eight teams compared to their pre-tournament levels. Louisville is up +8% in their likelihood to be crowned the 2021 National Champion, up from 16.5% back in November.

Updated predictions moving into the Sweet Sixteen are live

To track changes in predictions, we added a second sheet. This sheet highlights the change in predicted likelihood of making the next round, as compared to our pre-tournament predictions. For example, the model doesn’t love Pitt and only gave them a 47% chance of reaching the Elite Eight. But now, given their matchup with Kansas, we predict a 91% chance of Pitt advancing this round – for a boost of 44%. Just taking the difference between current prediction and original prediction.

Similarly, Nebraska getting to play Illinois rather than Kentucky results in a 30% boost they’ll win this round, as well as a 13% boost that they’ll make the Final Four in Columbus next week. But that’s all irrelevant because Chris Tamas has the squad rolling, so we’ll obviously be seeing the Illini in Ohio. I-L-L!

So here we go! Selection show behind us, teams are now prepping 3 scouting reports for the weekend, traveling to their destinations, and eating some hotel catering while watching film projected on a conference room’s really really beige walls.

Here at volleydork, I’ve taken the last week off, lounging on a beach in Oahu with the family – meanwhile, Professor Dwight Wynne has been sweating it out, putting together the 2021 NCAA Tournament Predictions!

This post will eventually feature 2 charts. The first is shown below – it’s our pre-tournament predictions. As of November 30, 2021, this is what we think will happen. Obviously, these are probabilities – and therefore by definition, we will not be perfect in our predictions. To that end, we will add a second chart – this one we will update round by round, using the prior round’s data to inform our updated predictions. We will keep these separate not only to keep ourselves honest, but to highlight how certain upsets can dramatically reshape other teams’ tournament prospects.

*New* Round by Round Prediction Dashboard 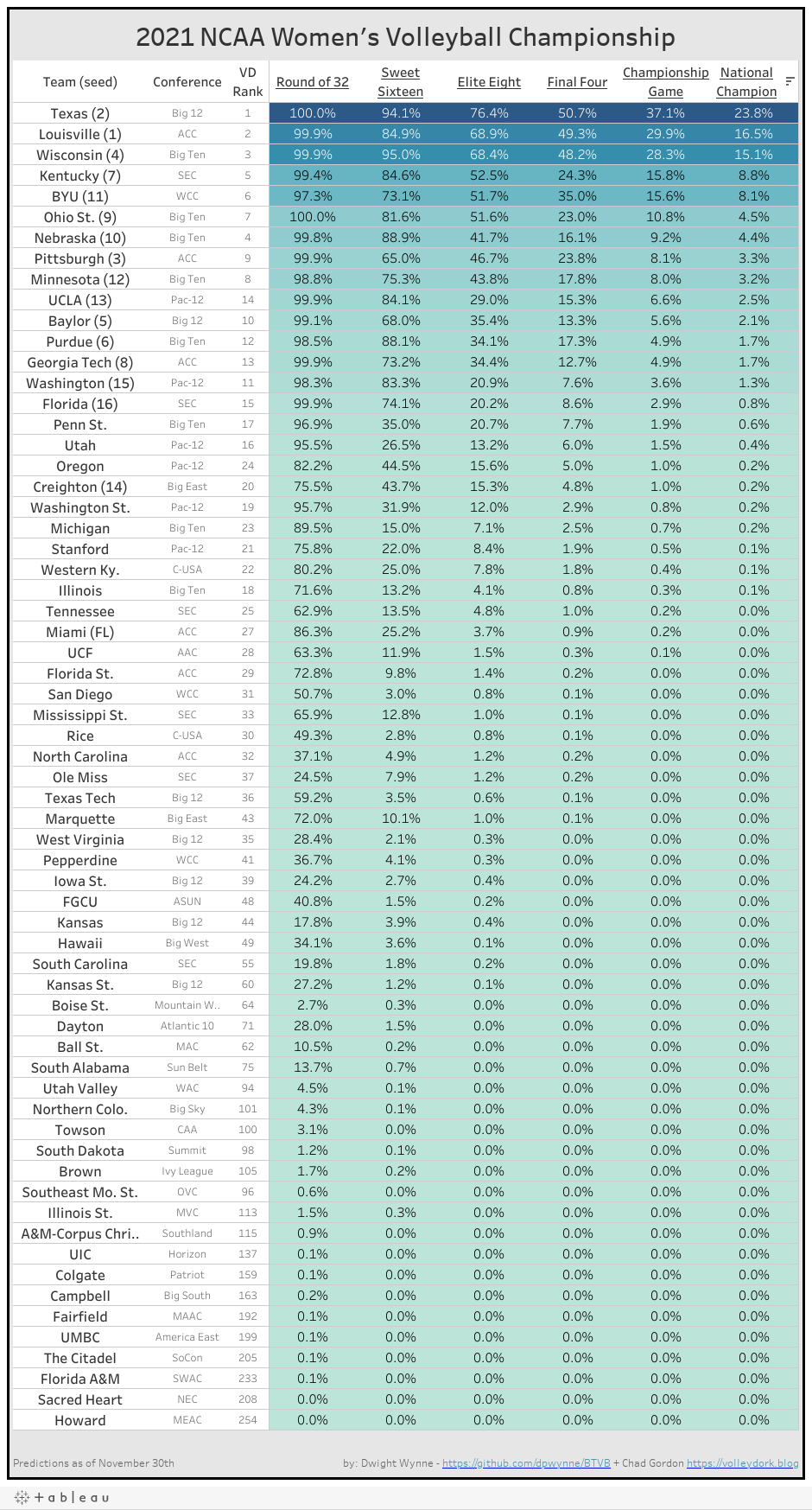