Played one of the stronger teams in Northern California in Branham HS last night – formerly known as the Bruin Dream back when it was captained by Taylor Averill, Ryan Holmes, and Ryan Sullivan of the CCS championship 2010 class.

But for our sake, just wanted to share some real world data from the 2019 Harker team.

Above is the serving data from the Branham match and what we are looking at on the left is the FBSO Eff of Branham when we serve against them. The values are in that little floating bar chart in the upper middle where an ace is worth -1.000 to Branham, a good pass is worth 0.000, and an OK pass is worth 0.088. These values are aggregated over all 3 matches Harker has played so far based on what each outcome was worth to our opponents. So a perfect pass, which would normally be the second worst outcome for Harker, is actually the second best because the teams we’ve played keep hitting perfect pass out of bounds…but in the long run, this should settle down and reflect our assumptions that perfect passes are good for the offense.

Biggest takeaway (other than that the top 3 servers play for MVVC) is that the bottom 3 servers from the match (Charlie, Jarrett, and Vance) are all much higher error than the rest of the team. If in fact teams are hitting so poorly against us in FBSO that just putting the ball in play is almost an advantage for our team, maybe we’ll ask our bottom 3 guys to stop hitting such high risk serves. 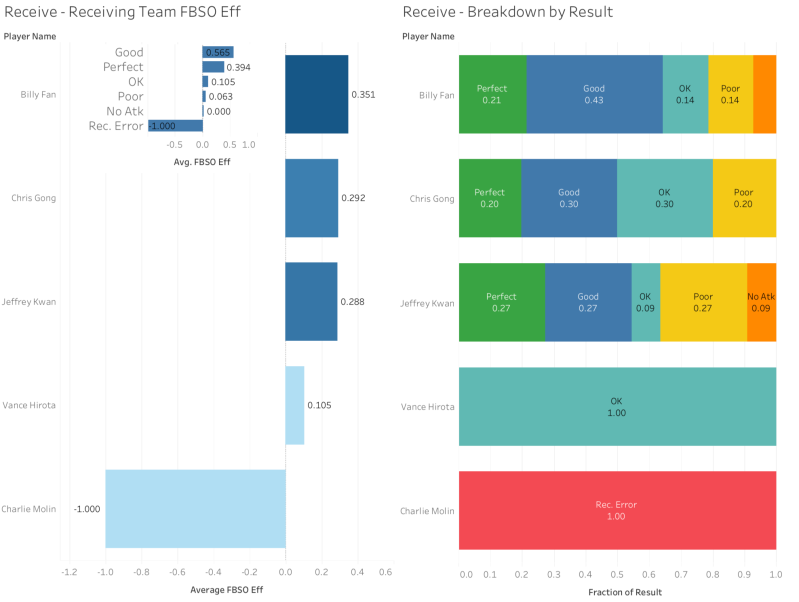 Reception is looked at the same way as serving – we see how well Harker has done given each type of pass using data from all 3 matches and create values for each outcome based on these expectations. The funny thing you’ll see here is that good passes are better for us than perfect passes – likely because on perfect passes we can set the middle…who sometimes hits it out. But on good, passes, we set our 3 big pins and things go better for us. 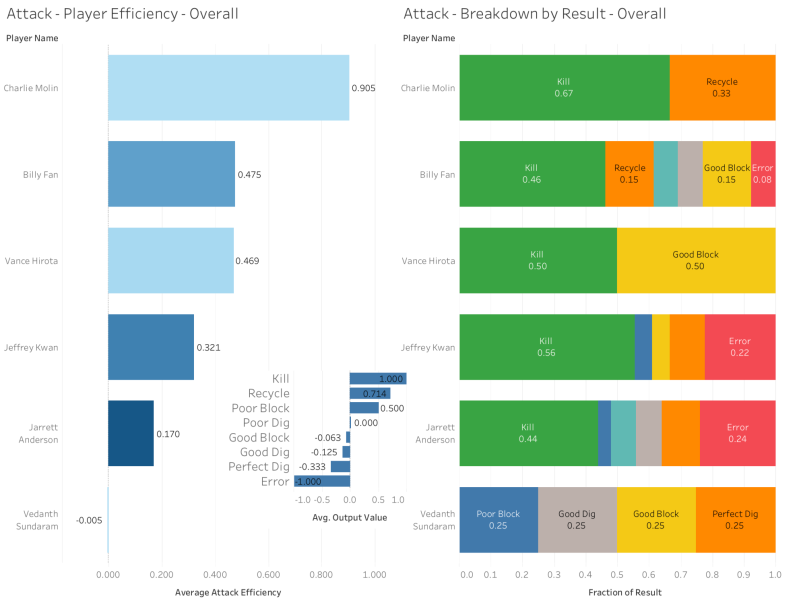 So here are the three attacking charts for our players. Top one is all attacks, middle is only in-system, and bottom is out of system attacking. I recently changed the values of how we calculate these just to increase the sample size since we only had like 6 out of system attacks to create values from. So now the values of each outcome are the same regardless of in-sys or OOS. A recycle is worth 0.714 to Harker whether it comes on an in-system ball or OOS.

Again, you’ll see the top attackers are also the low-error ones – and that attackers with more swings are shaded darker blue.

One thing we’ve been spending a ton of time on is OOS setting and attacking – and as you can tell – we still really suck. The goal is for the left-side players (Jeff and Billy) to engage with the blockers and swipe the ball out of bounds or jam it opened handed to the middle of the court. For Jarrett on the right-side, we can leave him a little farther off the net and let him bang because he’s a bigger dude with a bigger arm. Currently, we’re still terrible at this but will keeping grinding away in practice.

Finally we have our team sheets. This is team in-system attacking on the top and OOS on the bottom. The blue bars are the percentage breakdown of what results from the attack – and the orange Gantt bars represent the value of each outcome to us. In-system from last night looked pretty good. 50% kill, only 7% swinging into perfect digs – though 14% error could be better. Out of system was bad. 20% kill, 30% error!??!?!? are you kidding. and 20% attacking into a perfect dig by Branham. I’d argue that 50% terrible. So we’ve got some work to do. 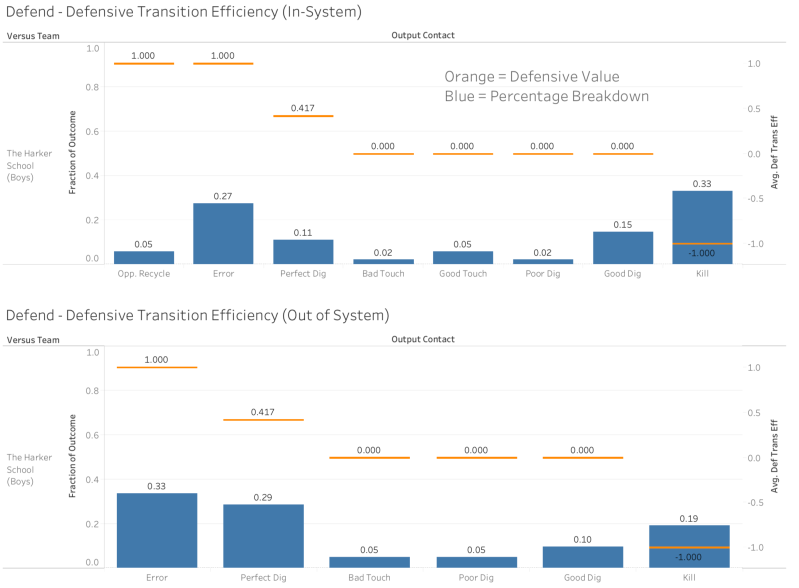 Lastly, here is our team defense against Branham (top is Branham in-system, bottom is Branham OOS). Same deal as the previous chart, with the orange bars being how well Harker scores on each of the Branham attacking outcomes.

I thought we handled the out of system defense portion pretty well – where they were swinging wildly, making a ton of errors, and we ran down all the easy stuff they had to send over.

Anyway – out of system setting and attacking + some basic blocking foot/eye work is on the agenda the rest of the week, so we’ll see how much better we can get!