Attacking is a little harder to nail down. The complexity outweighs serving & receiving, making honing in on the best approach very time-consuming. Here’s where I’ve landed:

The input for attacking is really the tough one – what factors help predict whether an attacker will be successful or not? In my experimentation, I’ve looked at the specific type of 1st touch leading into the attack (R#, D-, Cover+, etc), just the quality of the first touch (perfect, good, ok, poor), the specific code of the attack (X5, X6, X1, V5, etc) the number of blockers in front of the attacker, the distance between setter and hitter, the angle between setter and hitter, the combination of many of these, the combination of a few of these. While some of these are interesting, specifically the combination of distance and angle, the model I ultimately went with had both simplicity and built-in complexity. I landed on the conference the match was played in and the SkillType as defined by VolleyMetrics.

Specifically, I only looked at Power5 teams – and lumped the ACC, SEC, and Big 12 into a single group alongside the Pac 12 and Big 10. SkillType refers to this sheet below where you can see that similar attacks are already grouped together by “Type”: 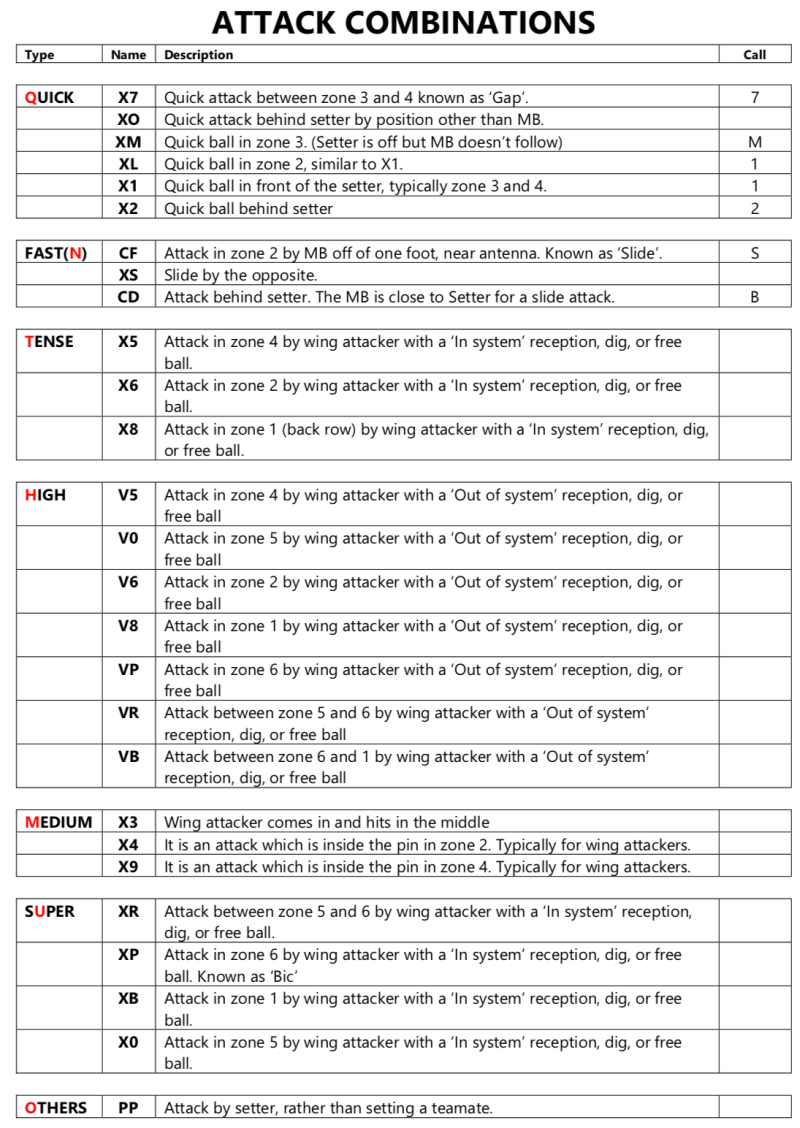 When looking at the SkillType (Q, N, T, H, M, U, O) in combination with the 3 conference variables, attack efficiency data for each team was explained with an Adj R-squared of 0.57. Not perfect, but since attacking is complex, I’d say this is pretty good. Plus we must remember that since the data is the aggregation on the team level, some teams in the league may be great and some may be crap, so we shouldn’t expect to see perfect correlation here when we fail to adjust for the talent level of the team (we do this broadly by accounting for conference). 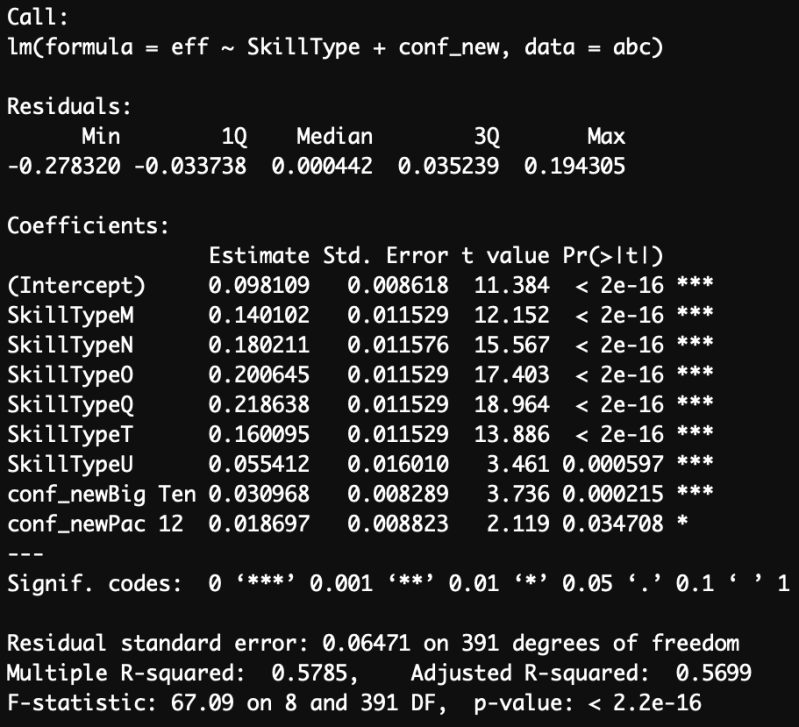 Now for the result. Kills and errors are simple. +1 or -1 respectively. But what about non-terminal swings. Surely a bad dig by the setter is preferable to a perfect dig by the libero? What if you get blocked but we cover you? What if it’s a great soft block by the opponent and now they’re likely to be in-system in transition? Because these outcomes all have different values in terms of winning/losing the point, we must account for them.

So to do this, we look the block and dig codes of the opponent and see how likely we are to win the rally when our opponent makes any of the specific touches (B-, B/, B+, D-, D#, D+). These account for balls that are covered as well. Here’s the formula we us. Smart folks will notice that the intercept + kill doesn’t sum to 1. I’ve manually addressed this issue since sometimes VM has coding that makes no logical sense: 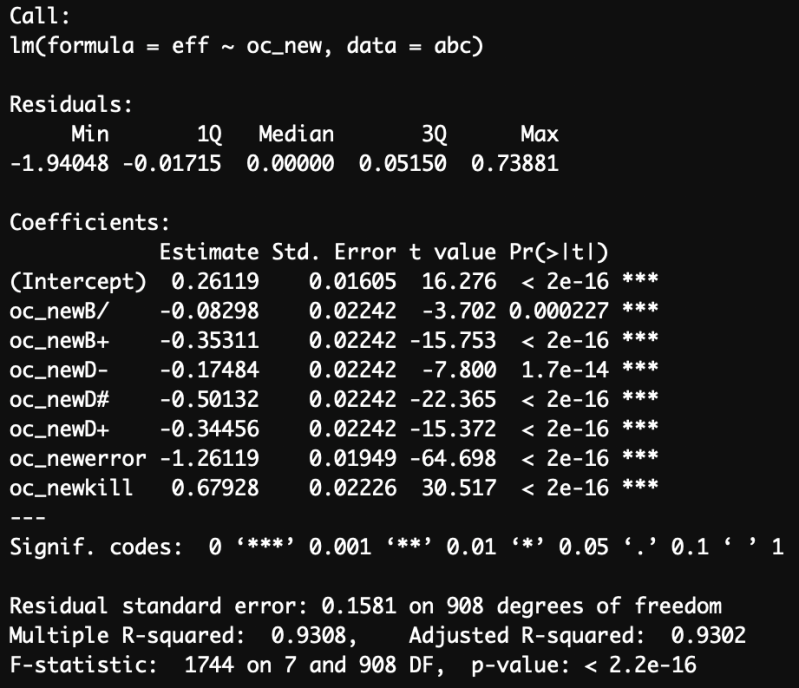 So now we have the expectation based the SkillType and Conference. We have the prediction for what the result is worth using different “outcome contacts,” and all we need to do now is find the difference between the two on any given attack to create our Points Over Expectation (POE). 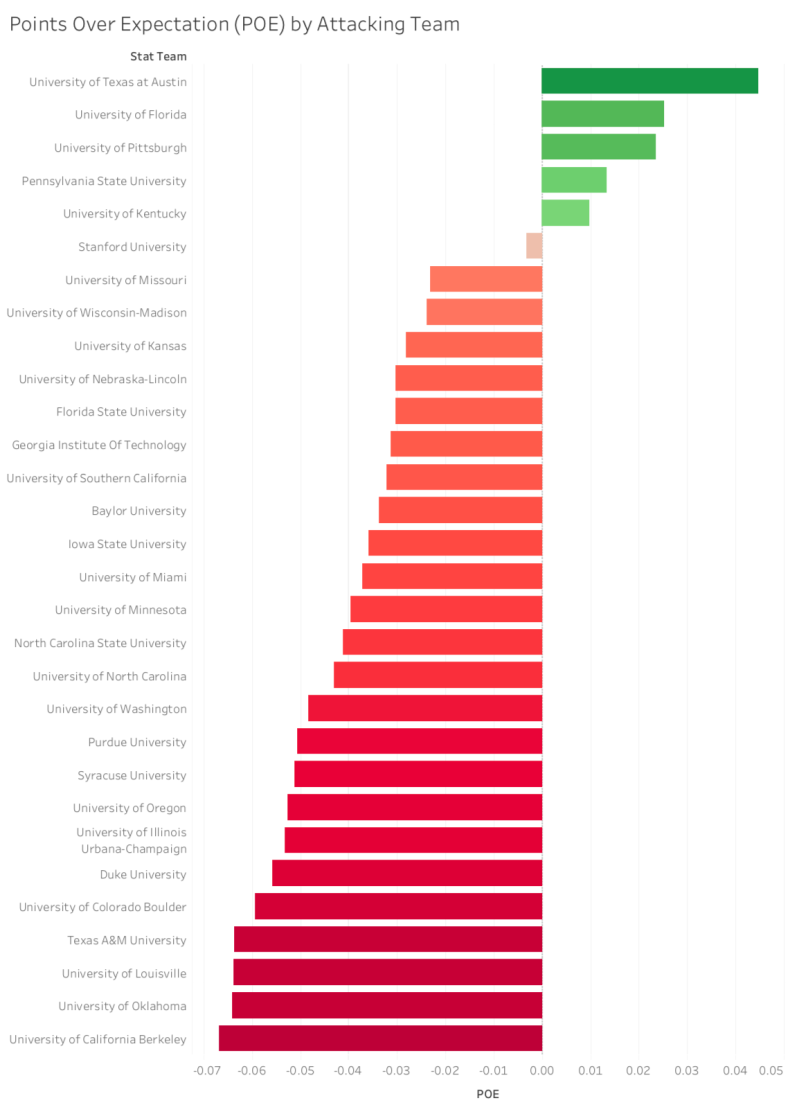 So we do that and what we immediately see is actually a little confusing. Only Texas, Florida, Pittsburgh, Penn State, and Kentucky have positive POE’s. Why is this? Keep in mind we lumped the ACC/SEC/Big12 into a single conference so Texas/Florida/Pittsburgh/Kentucky have an easier time being above average than Penn State does in the Big Ten. That being said, because we are basically subtracting the expected transition efficiency of our opponent from our own attack efficiency expectation, we see a ton of negative values. To be fair, this is the Top 30 in terms of greatest POE, but what you’ll see is that these teams all have very very high Kill% numbers. 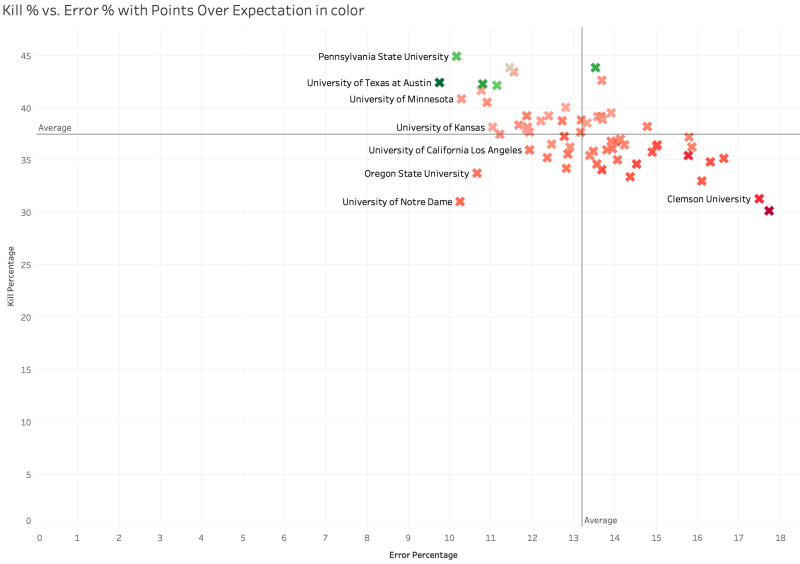 Pittsburgh here is the second highest green X in terms of Kill%. All 63 Power 5 volleyball schools are visualized here. The highest grey X is Stanford – great ratio of K to E percentages, but they likely struggle with good decisions on the non-terminal swings. The same with Wisconsin, the top light-red X right under Stanford. When these teams don’t score or error, their opponent is often in a good situation. Because the average percentage of terminal swings is about 50-51%, teams who fail to address their non-terminal tendencies may find themselves falling short in terms of POE.

Here’s how teams do on non-terminal swings and remember this is all 63 Power 5 teams: 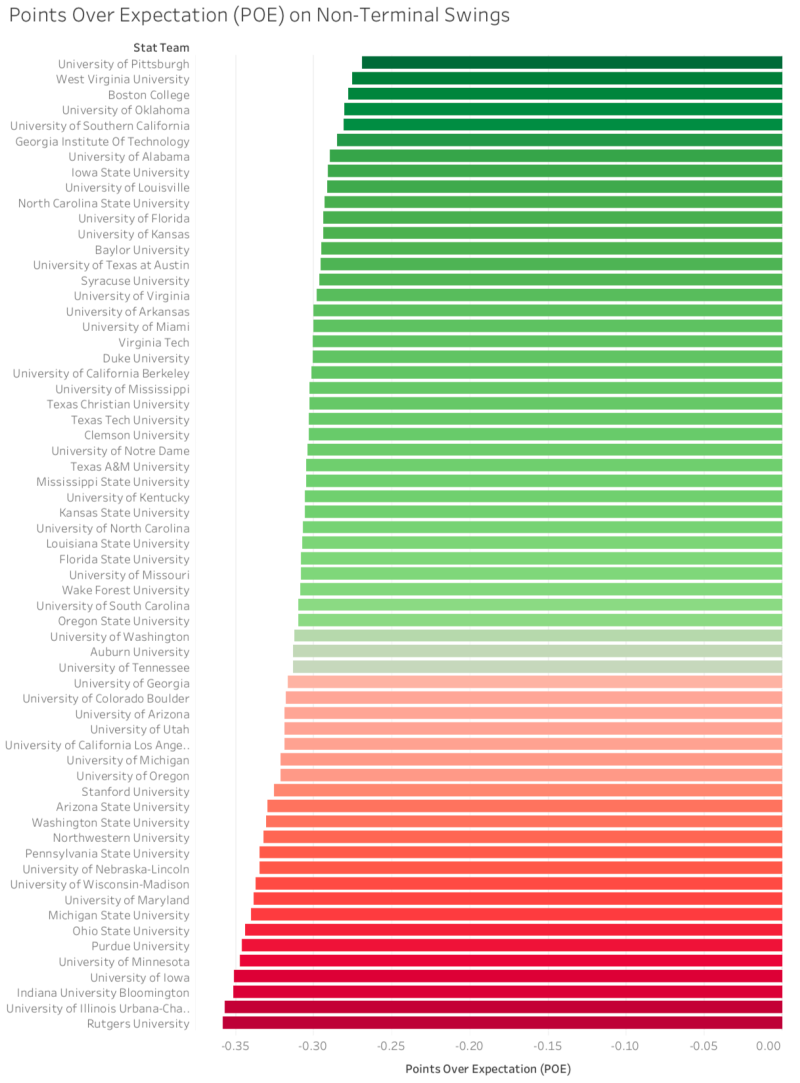 Interestingly enough, we find Pittsburgh at the top of this list. While all teams are negative (this makes sense unless you found a way to recycle every non-terminal swing and prevent your opponent from ever attacking in transition), you’ll notice that Stanford,    Wisconsin, Purdue, Nebraska, Minnesota, and Illinois – all teams in that upper left quadrant of above average in K% and below average in E% – are in the bottom quartile for non-terminal POE. Granted, these teams play in extraordinarily tough attacking conferences so any ball you send over that gets dug is more likely to be killed than what Pittsburgh sees in the ACC, but perhaps all these teams could take a lesson from whatever it is Pittsburgh is doing…