Explaining the past and predicting the future are two wildly different concepts. Outcome bias runs rampant in articles and ESPN talking heads – where rationalizing previous behaviors based on results seems to be what these folks are paid to do. After last night’s game 3 loss to Boston, the commentators criticized Lebron’s play – but had the Cavs pulled it off, they’d be praising him for allowing Love/Kyrie to get their shots and build confidence moving deeper into the postseason. This is why explaining the past isn’t always helpful to coaches because unless the variables are the same, the situation is inherently different than the past.

Our goal shouldn’t be to rationalize successes/failures but to make the most informed decision and understand and live with the fact that you’re playing the percentages. To that extent, we should focus on things we have control over – things that are actionable.

I started writing down a list of things that are actionable in volleyball; the first thing you get to do in the match is decide which rotation you want to start in, given the knowledge that you will be serving or receiving.

I took the 2016 Big Ten conference matches and calculated Point Score and Sideout percentages for each team, in each rotations (points won / all points in PS or SO phase). Next, I used these numbers to build 12 unique sequences with the first option being serve in Ro1 all the way to starting by receiving in Ro6 – and everything in between.

I built a script in R to use the probability of winning the point (given the PS or SO data) to determine an outcome (won point, lost point) and then take the appropriate next step (win while serving? serve again using same PS%. win while receiving? rotate to next percentage, PS% in next rotation). This continued until the team had 25 points then divided by the total number of points played to determine the points won %. This simulation ran 10000 times and the average points won % was calculated. 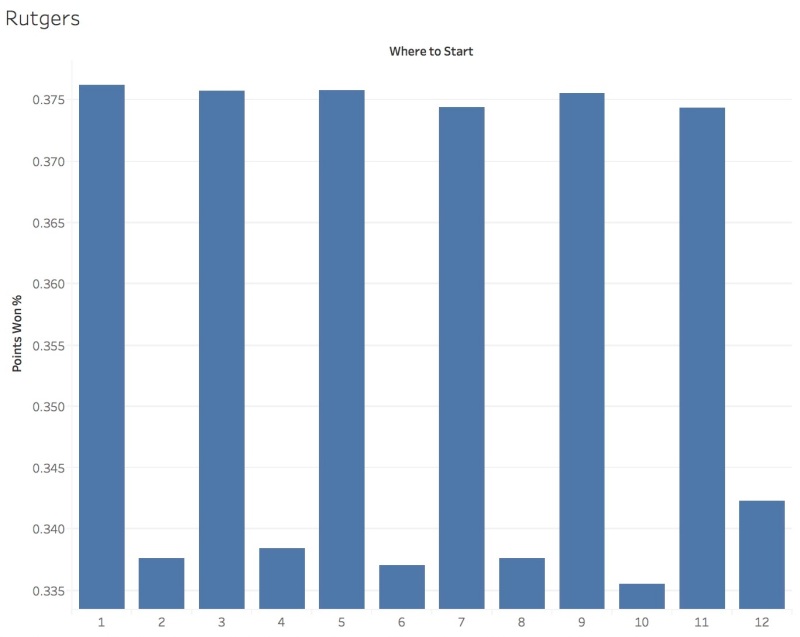 What you see on the y-axis is this points won %, just looking at all phases of the game, what percentage of total points did the team win when they started in a specific rotation and serve/receive. On the x-axis, the numbers 1-12 represent the 12 potential starting rotation combinations. 1 is serve in Ro1, 2 is receive in Ro1 – all the way to 11, serve in Ro6 and 12, receive in Ro6. 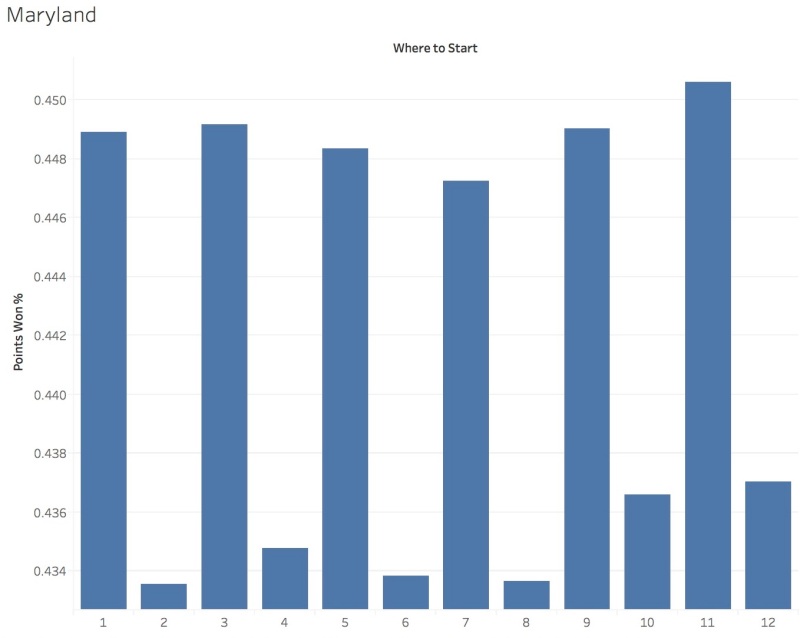 What you may notice, is that for some teams, serving first is actually better. I couldn’t believe this at first, so I re-ran the simulation. I honestly still don’t get it. One thing noticeable is that for lower teams in the league (Maryland/Rutgers), their PS and SO numbers are closer together than the Michigan State and Nebraska numbers. 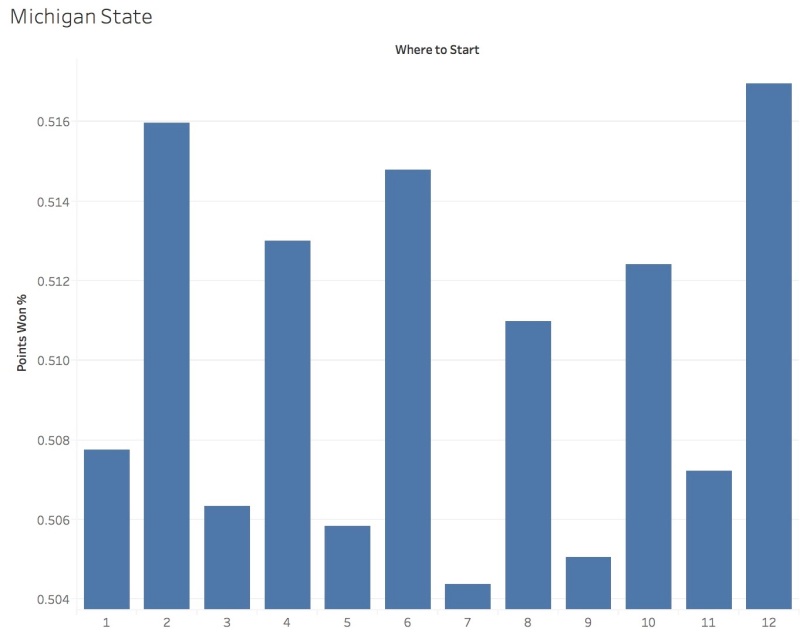 At the end of the day however, if you look at the y-axis, the difference between starting in serve receive in Ro4 vs. Ro6 for Michigan State is only a third of a percentage point difference in the set. This was pretty common amongst all the teams, as you can see.

So there you have it, the first real actionable choice a coach can make in the match – where do we start. A follow up question could naturally be, well what about matching up against strong/weak rotations of your opponent?? Fair point. When I went back and looked at where teams in the Big/Pac started in a set, they actually varied more than I thought. Wisconsin spins the dial all the time to get what they feel are favorable matchups, so if you’re playing them, you wouldn’t dare presume to know where they’re starting. Without this knowledge, you can’t line your own team up appropriately. So unless you want to really roll the dice, stick to what works best for your own team, regardless of your opponent.

Recap. Simulated a single set using PS and SO data from Big Ten 2016 conference matches. Repeated experiment 10000 times and took average percentage of points won in the set. Odd numbers are Ro1 through 6 when you start serving, even numbers are receiving. Teams with PS and SO percentages close together may benefit from serving? Better teams, keep receiving if you can. Since you’re likely to cycle 2.5x through your lineup each set on average, does the extra 1/2 a percent matter? 40-50 points played each set? so that’s not even 1 full point extra? I’d say no.

p.s. when coaches try to get the “right” matchups, do they ever go back on Sunday and look at the data for how that choice played out? did our blocker really slow down that hitter? did our different serve receive pattern handle their high PS’ing server? trick question. outcome bias. if you used data and made the best decision, then it doesn’t matter.