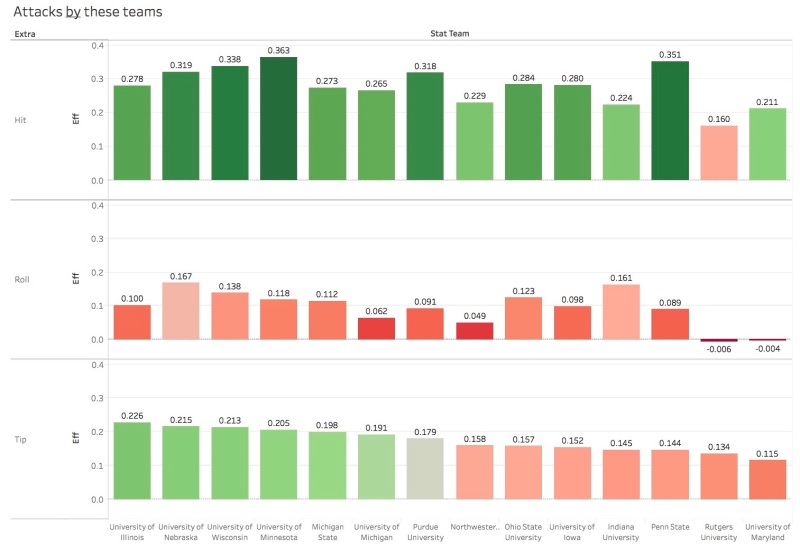 So what you see above is how well each team in the Big Ten attacks when they use a variety of shots. Originally I was interested in looking at how well teams both used and defended against the tip, so that’s why they’re ordered in this manner.

As you might expect when looking at full swings, teams like Minnesota, Wisconsin, and PSU really excel. The former two via speed and range while the latter team goes slower and hits harder. But overall, the order of teams in this category isn’t shocking.

Something I wasn’t expecting was how poorly teams score on off-speed rolls. It would be interesting to look at the percentage of these that are off the block for tools rather than just being slow, poor attempts at swings that go awry.

And leading the pack in tipping efficiency, the Fighting Illini. Not necessarily sure what to make of it, but there it is. If you’re playing Illinois, you should probably have your tip coverage figured out. If you’re playing Maryland, don’t worry about it. 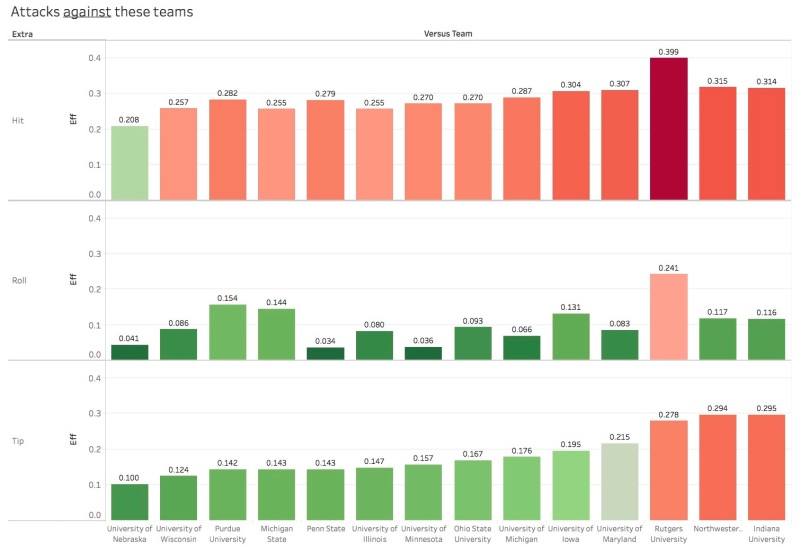 Here’s the viz I was even more intrigued by – how well do teams defend against each speed of attack. Nebraska separates themselves in this field. They handle both hard driven attacks and tips at the best rate, and roll shots at the third best (behind PSU and Minnesota). Moral of the story. Don’t tip on Nebraska? People who have played them recently understand the scrappiness of their backrow, spearheaded by JWO who departed the program this spring for a summer in Anaheim.

One interesting takeaway from this is the mediocrity of Minnesota’s tip coverage. Personally, I expected a defense built with the understanding that the off blocker dedicates herself to rolling under to cover the tip to perform better than average.

You could of course expand of this concept to turn it into something more actionable. How does Ohio State handle the tip on the Go when you run Go-Slide at them. Or how successful is Wisconsin at tipping on the Slide when they throw Go-3-Slide at you and force your middle to front the quick. Or even from a personnel basis, what’s the average dig quality when you tip against their setter versus their opposite. Having these ideas in the back pocket might be a get out of jail free card if you find yourself stuck in a tough rotation.