It’s a pretty crude visual, but an interesting topic. So I was out in Boston this past weekend for the Sloan Sports Analytics Conference and got a chance to talk stats with the VolleyMetrics crew for what probably seemed like 48 straight hours to them. You should read their paper, it’s a great step forward for volleyball analytics. When I landed on Thursday, I grabbed a beer with Matt Jones, a guy I coached with in SB who has gone on to bigger and better things as an assistant for the men and women at Harvard.

One of the topics was around where you’d be better off setting a high ball from. My contention was that when I attack an out of system ball, if I can see the set and the block at the same time, this should make it easier to aim my swing. Biomechanically, this angle is also more similar to what an outside is used to seeing – rather than a ball coming over his shoulder from 15 feet off the net.

So what you see above is the court broken into zones/subzones and the hitting efficiency of attackers in the Pac 12 from the 2016 season when the set originates from the zone in question. This is only for high sets to the OH. It does not differentiate who is setting, just that these are classified as High and not Go sets to the left side. If there were fewer than 40 attempts from the specified subzone, I crossed them out.

I’ve circled subzones for which hitting eff is above .130, a completely arbitrary level. You can determine on your own what level you expect, but it offers an interesting conclusion that seems to support my hypothesis. Attackers in the Pac 12 hit better on this type of set when the set originates closer to the net/closer to the middle of the court. I’m admittedly posting this quickly rather than creating a pretty visual and running it for the Big Ten, but I hope it sparks a new thought for some readers.

What this might suggest is that rather than having your setter dig balls over to your libero in left back, you might want to dig to about 5-10 from the net and let the next set originate from the middle of the court. As you can see, zone 3 is a great spot for this set to come from and may influence how you handle easy digs by your setter.

Of course this is a little different for each team and if your go-to high ball hitter is your rightside, you’d run this looking in the other direction. But hopefully this at least makes you rethink casually shoveling setter digs to left back. If you look at Stanford over the last few years, often it would be Inky or Lutz setting out of zone 3 to the pins. Admittedly this takes time to get your middles to do this, but a bumpset by your libero or even using your BR outside to handset from zone 3 might be the way to go.

*edit* just kidding, ran it for the Big Ten – circled those above .130 again. Some subzones have a small number in the upper left corner, that is the number of attempts if they were on the lower end of things. So we might view the effs up around .290 with a grain of salt for zones 2C and 3B. 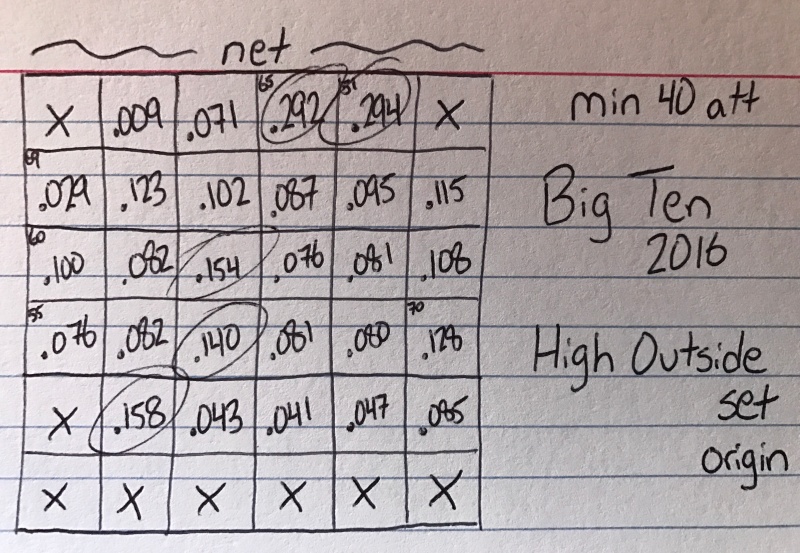 Just looking at the numbers and ignoring my circles, this viz might ask more questions than it answers. Couple thoughts just off the top of my head that are merely possibilities. Do the setters who set from tight to the net also put up sets that are too tight for most hitters to deal with – leading to those .009 and .071 effs? Are blockers in the Big Ten better overall than the Pac12? Are attackers in the Big Ten worse? Are defenders in the Big Ten better? Why are zones 8C/D and 5B better than others? Is it because teams train from 8c/d more often? Is this actionable if I’m a coach in the Big Ten? (probably not).

One idea is to create a setter cheatsheet showing how different set origins should be distributed to different players (perhaps even by rotation if you’re fancy). Created visually, a setter could see that “perfect” passes should go to Mary-Kate, while medium passes toward zones 4/7 should go to Ashley, while poor passes to zone 6 should go to some other Olsen sister – all in an attempt to help your setter distribute the ball more efficiently.