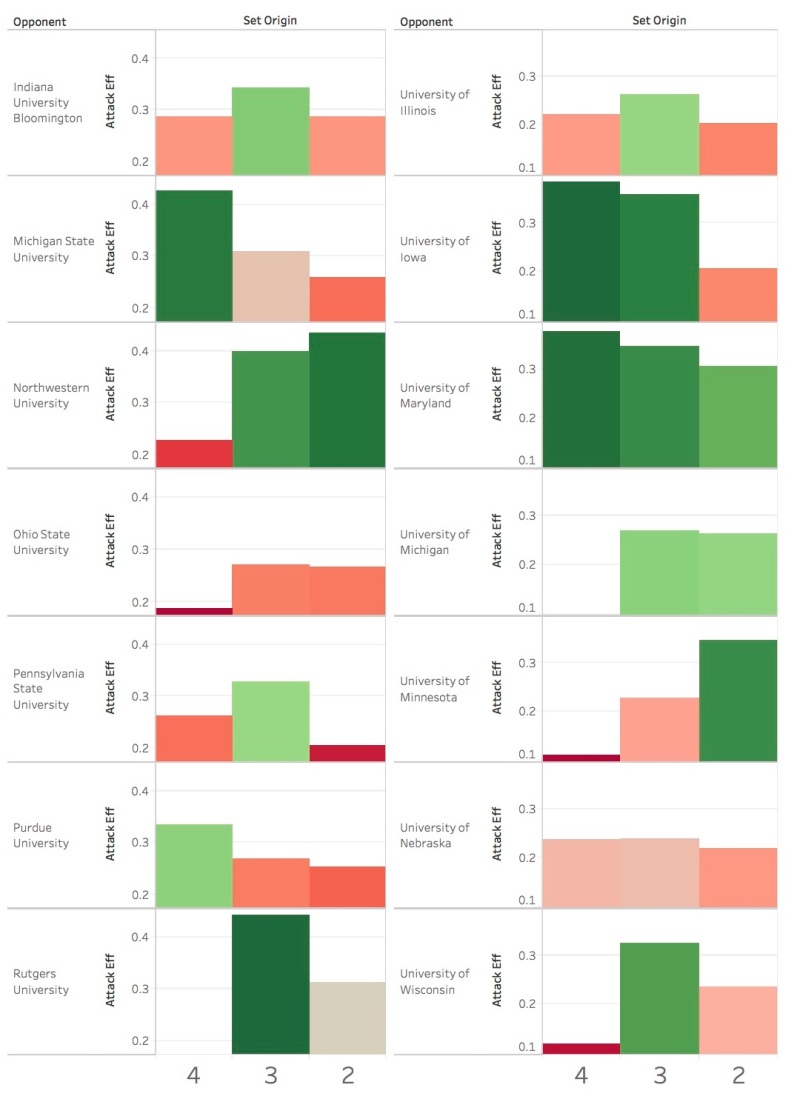 Just so we’re all on the same page, what you see above is the attack efficiency when hitting a “Go” when the set originates from zones 4, 3, 2. Zone 4 making this is a “short side” set – and zone 2 making this a “long side” set…is that the right term? Without the alliteration it’s not as catchy. The team names are who you are hitting against. I’ve used the whole Big Ten season from 2016. I’ve filtered out those with fewer than 40 swings (eliminates Rutgers/Michigan Zone 4) to make sure we’re not generalizing from small sample sizes.

Offensive theory has a bunch of different tactics when it comes to setting, but they all revolve around the idea of moving attackers (and the ball) around put your offense in the best position. For example, a setter might run her middle on a 3 to overload the opposing right front blocker – or to isolate her right side attacker and hopefully get her a 1 on 1 situation if the blockers are fronting your middle. This is the basic idea.

To compound this is the concept of short side setting – meaning you set the hitter you are closer to. If the pass takes to forward into zone 4, you set the Outside. If the pass pushes you back into zone 2, you flip it overhead to the Rightside.

Here’s the same concept applied to the Slide. I’ve filtered out zones with fewer than 20 swings this time, but even with that, nobody really chucks the slide from zone 4 that often. Makes you wonder if you shouldn’t still be read blocking if they’re setting from zone 4…

Anyway, the majority of teams improve their attack efficiency as they move into zone 2 – with major improvements by Ohio State and Purdue when they short side the Slide. I could write more about these colorful bars, but I think you can decipher on your own.

The seed I would like to plant however relates back to the Optimal Choices / Optimal Choices 2 posts. With this information, why couldn’t you create the optimal offensive strategy? If you know you’re playing Minnesota, we’ve seen that you really really don’t want to short side the Go against Hannah Tapp and SSS, so why not prepare for that situation during practice and scouting? Maybe the better alternative is to flip a back 1 to the middle or the OH on the bic? Maybe the better choice is launch it back to your rightside attacker? Or if none of those are better than the 0.100 eff Minnesota typically holds short sided Go’s to, you better know where to tip that ball to get Minnesota in the worst possible position. Maybe it’s to the setter, maybe it’s to zone 4 as Wilhite and Hart roll under the block in zone 3. Maybe you try to recycle it off the block and get another swing on your side?

Regardless of what you choose, the principle is the same: why can’t we prepare to make the best possible choice once we recognize the situation? There is a statistically objective choice that is better than the rest. Why can’t we make the optimal choice when it comes to who we set?