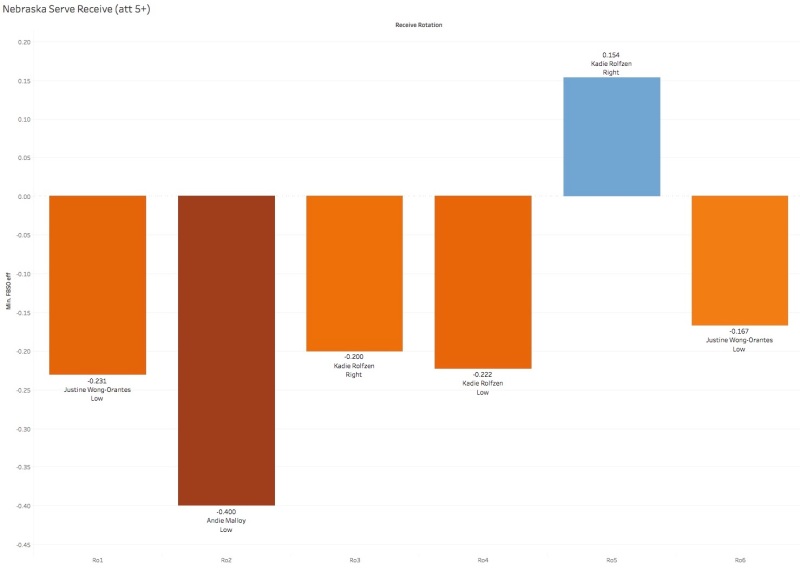 So I was watching the UCLA / BYU match tonight and was frustrated by the number of errors made from the service line by non-jumpservers. If Micha, JT, or Ben Patch want to go back and rip it, I get it, they’re going to miss at a higher rate. But if you’re a Joe Grosh or Hagen Smith who’s just popping in floaters, you gotta make 99% those (I think).

This got me thinking about Jake Langlois and his subpar passing over the last 2 nights. Obviously he’s the serving target if you’re UCLA, but are there specific rotations to attack him in? Are there specific areas in his passing lane that you want to attack? Or are you better off just attacking a specific zone on the floor in each rotation, regardless of the passer (i.e. serving zone 2 to make the setter play the ball over his shoulder which is of course tougher to set and tougher to glance at the opposing MB). Since I don’t have MPSF data (looking at you BK), I decided to run this experiment on Nebraska, arguably one of the top receiving teams in the Big Ten this season.

What you see above is a breakdown of the specific passers and the relative locations they took the ball (left, middle, right, low, overhead). The viz only shows the result that caused the worst FBSO eff for Nebraska per rotation. As you can see, there are different individuals and different positioning that lead to this effect in each rotation. You might not think that JWO would appear on this list at all, but in Ro1 and Ro6, if you can get her to take the pass low, Nebraska struggles.

Now you might be saying: 6 rotations, 5 different way to take the ball, 3 to 4 possible passers in each rotation – is there enough data to really extrapolate from here? Totally fair. The top viz shows the worst performing combination in passers who took the ball in the specified position a minimum of 5 times. But as we can see for Malloy in Ro2, Nebraska probably went for 0 kills, 2 errors, on 5 attempts when she passed a low ball. That’s not a great sample size. Touché, insightful reader, touché.

Here’s what that same viz looks like if you only look at those with at least 10 passes in the specified rotation and positioning. Again, these are the lowest FBSO eff’s per rotation, but this time, the increased minimum helps provide a more useful insight.

This isn’t the sexiest viz. It’s 3 bars and 3 rotations that happen to be at .000 – yet zone 9 steps forward as the best way to serve at Nebraska in 4 of 6 rotations. For those who aren’t sure, zone 9 is between 1 and 2. This discovery seemingly plays into the “make it tough on the setter” theory of serving. Zone 8 in Ro2 doesn’t make a ton of sense to me seeing how that’s the dead center of the court, but maybe those serves dropped on the middle back passer or something? Zone 5 in Ro5 wouldn’t typically be an odd outcome – attacking the pass-hitter isn’t uncommon, especially in 2 hitter situations. But Nebraska pushes their pass-hitter, Foecke, out of the passing rotation here (or they did in the semis w/ Texas) and it’s actually JWO who passes in zone 5 with Rolfzen in the middle and Albrecht in zone 1. Not sure I can explain why this has the lowest FBSO eff for Nebraska.

The progression to this question is of course, does the start zone of the serve matter. Serving 5 to 5 is not the same angle for the passer as serving 1 to 5 – and objectively speaking, one is likely better than the other. Unfortunately, I scrap the serve start zone when I parse all the files – so I need to go back through my code and fix all that. That’s why that train of thought wasn’t expanded upon in this post. But I’ll get around to it.

Anyway, I think this type of viewpoint gives rise to an interesting question. Is there a methodology to serving such that you could actually “serve optimally?” Think about it.