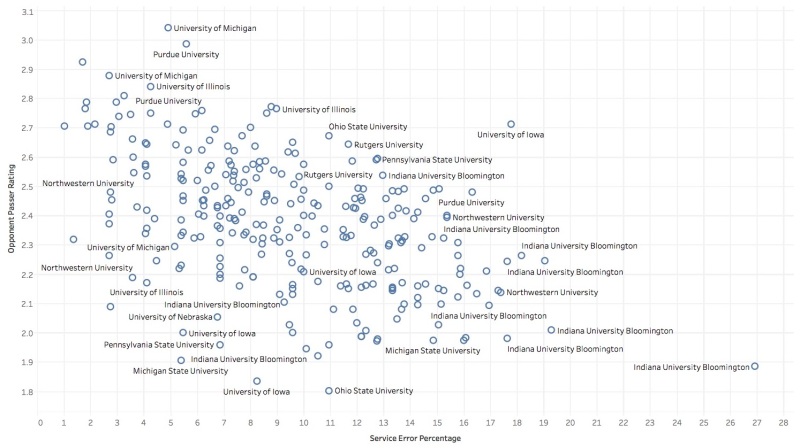 How aggressively do we want to serve?

Tough, but not too aggressive? Keep it in and make your opponent work? Screw it and let it rip? Probably somewhere in the middle…? Serve tough until enough parents in the audience complain?? (Side note, listen to Becks talk serving if you never have)

The first step coaches usually take is to look at the Ace:Error ratio from the service line. Most will tell you they’re happy with 2 errors per ace, or something similar. Cool, but this doesn’t really provide a “why” – it’s just a way to glance at how “tough” you’re serving, but fails to explain anything of value.

The next logical step is what I’ve shown above. Service error percentage against your opponent’s passer rating. The idea here is to lower their pass rating while keeping your error percentage to a minimum. And to clarify, the teams labeled above are the serving teams in the particular match and their opponents are rated on a 4 point passing scale.

The above viz shows team performance in every individual match in the 2016 Big Ten season. And in general, the cloud of data slopes downward, indicating that the more service error you’re willing to risk, the more you can expect your opponent’s pass rating to drop.

But this leads us to the next step. Iowa, Ohio State, and Indiana have the 3 lowest single-match opponent passer ratings on the season. But are their respective 8, 11, and 27% error levels worth it?? The issue with looking at passer rating is that, by default, it ignores service errors – and so finding the appropriate tipping point becomes inherently difficult.

p.s. I’ve attached a player-specific version of the same viz below. I’ve filtered out any players who served fewer than 5 balls in a given match, but the trend is the same. 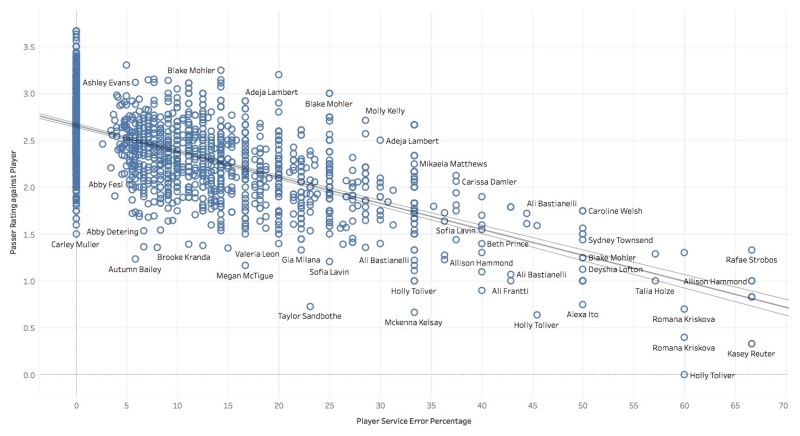