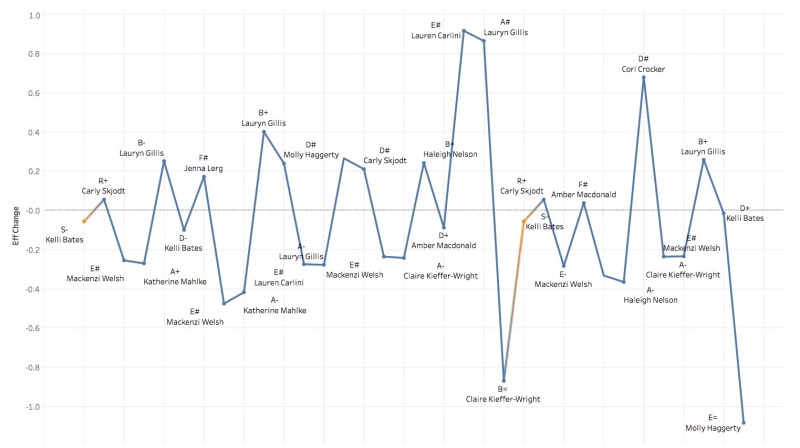 *if you haven’t, go read Output Eff first or you’ll be lost.

Here are the same two rallies we’ve been looking at for Output and Input Eff. The only difference is that we’ve calculated Eff Change via (Output Eff – Input Eff).

The idea here is to look at the situation you were dealt and the result you got based on your contact. So for Skjodt’s first pass (R+), this touch is just a little better than our expectation and she raises her team’s Win Efficiency by around 0.050. Later in the rally, Jenna Lerg’s perfect handling of a freeball (F#) sets Michigan up nicely to win the rally – however when Mahlke attacks, Gillis get a great block touch, turning a bad situation for Wisconsin into a good one (worth .400 to Wisconsin). To terminate the rally, Gillis takes MacDonald’s D+ and gets a kill. The reason that Gillis’s swing isn’t worth 1.00 is because Wisconsin on a D+ already sets up Wisconsin nicely to win the point (eff = 0.150). So because Gillis starts from this advantageous standpoint, her kill is worth 1.00 – .150, leaving her with a value for her kill of 0.850.

To pull on this same thread, Haggerty’s setting error to end the second rally actually costs Wisconsin more than a point because she took a good situation for Wisconsin (D+) and immediately lost the rally for them – leaving her with an Eff Change of her setting error of -1.150. Moral of the story, get out of Carlini’s way.

This is kind of a gnarly way to look at the game – and individual rallies. It takes a minute to let these ideas sink in, but let them marinate for a little and see what you think.