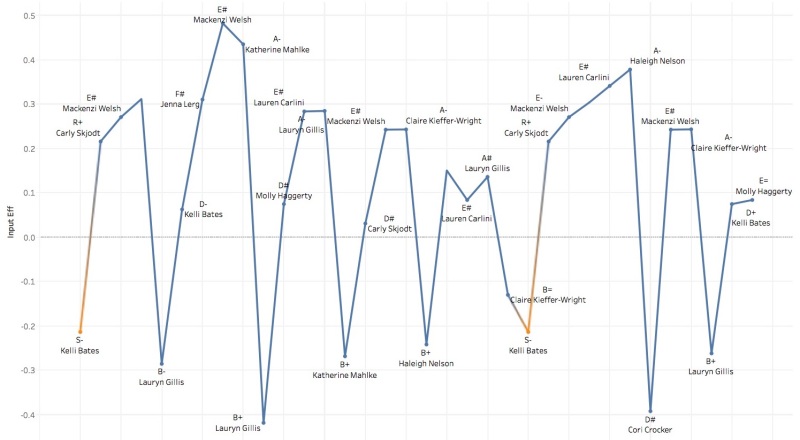 *if you haven’t, go read Output Eff first or you’ll be lost.

Here is the other half of the puzzle. Input Efficiency.

Input Eff works the same way as Output Eff except we look at the previous contact to determine the situation you were dealt. The idea here is that attacking after a poor pass is not the same as attacking after a perfect pass. Or that digging a great quick attack is much easier if there is a great block touch to slow it down first – it’s much tougher to dig if there’s no block touch.

So here again we look at both sides.

1. How well does your team making the contact do against all teams when the Input Contact is X. How well do you attack when your InputContact is R#, D+, F!, etc.

2.How well do all teams do against your opponent when the input contact is X.

For serving/receiving there really is no Input Contact so we just use Point Scoring Eff or FBSO eff in general when you go back to serve or your team is in serve receive respectively.

If these all needs way more explanation, someone let me know. Please.

In the next post, we’ll combine Input and Output Eff to determine how players add or subtract value on their respective touches, while accounting for the circumstances they are dealt. How well do OHs do when given a poor pass to hit off of? How well do defenders do when digging after an opponent perfect pass vs. terrible pass? We’ll look at these things as we introduce Efficiency Change.