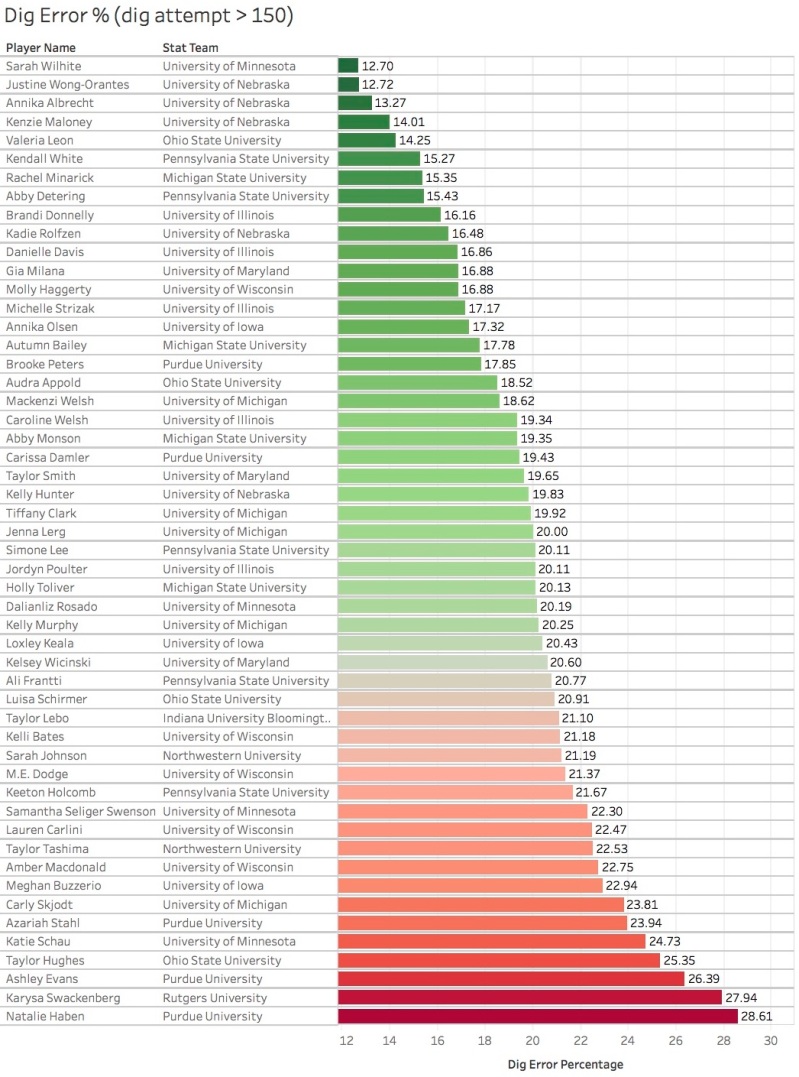 Dig Percentage is something that comes up as a way to measure defensive efficiency. You might look at two similar passers and see which one of them shanks digs at a lower rate as a means of evaluation. As we can see from the viz above, Wilhite, JWO, Albrecht, and Maloney (3 of whom play for Nebraska, the other happens to be the NPOY) hold the top slots in terms of minimal dig error percentage.

There is certainly the point to be made that defining “dig error” is subjective – and what should count as playable vs. undiggable. But at least to the initial eye test, the results seem reasonable. Just take a second to think it through, when you attack and Sarah Wilhite is on the receiving end, that ball comes up 87% perfect of the time. I know there are club coaches out there who are ecstatic if the ball comes up half the time when it’s hit at their players – so 87% is pretty silly when you really think about it.

But the more you think about it, the next logical question is what’s the quality of these digs? Because if we’re just lipping tough balls and sending back freeballs instead of transition swings, 87% is less impressive. So let’s look at the breakdown: 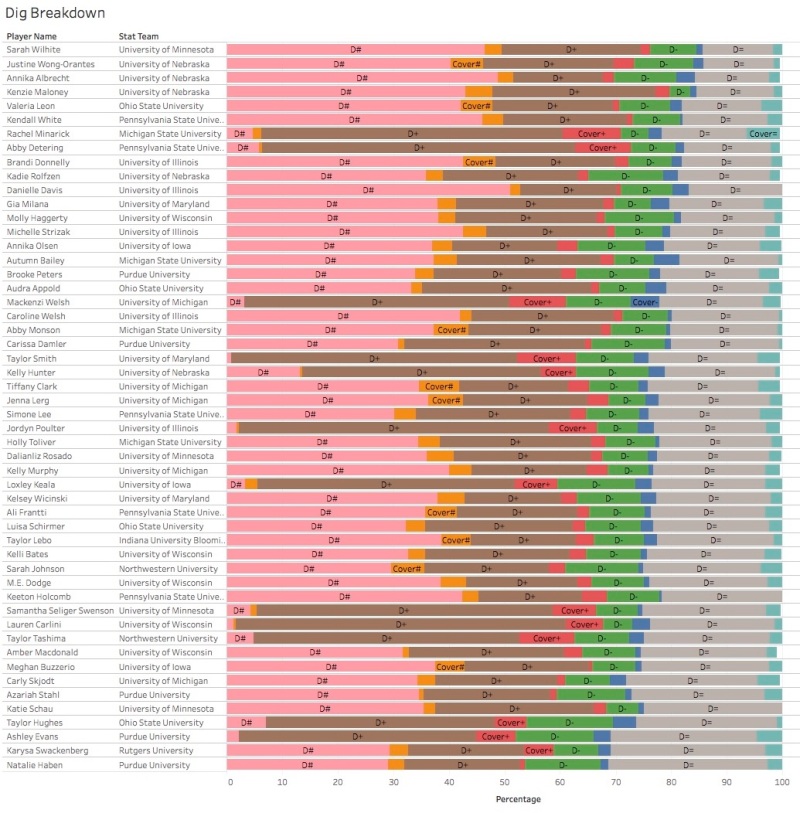 Apologies, I know it’s not the simplest to read. But they’re in the same order!

Basically, the greater space the pink, orange, brown, and red take up, the better. For those colors, your team got a swing off the dig/cover. If it’s a D- or Cover-, you overpassed it or did not get a swing. The grey D= and kinda teal Cover= represent dig errors that ended the rally.

Before we all jump on the setters for slacking in the perfect dig department, keep in mind these players typically dig to 10-15 feet on purpose so the libero can use her hands. They’re not aiming for the area of the court that we would usually  refer to as a perfect dig. It’s clearly a lack situational context but we make the most of it.

I think this breakdown helps to the same degree that looking at passer ratings does. Somewhat, but not all that much really. What we actually care about is what those contacts are worth to their respective teams. If a player is 50-50 D# and D+ does it matter if her team hits the exact same off both dig qualities? No. She could be 100% D+ in that example and she should be valued the same. So let’s look at how these major defensive players actually “better the ball.” Hey Owen, you’re welcome. GDH. 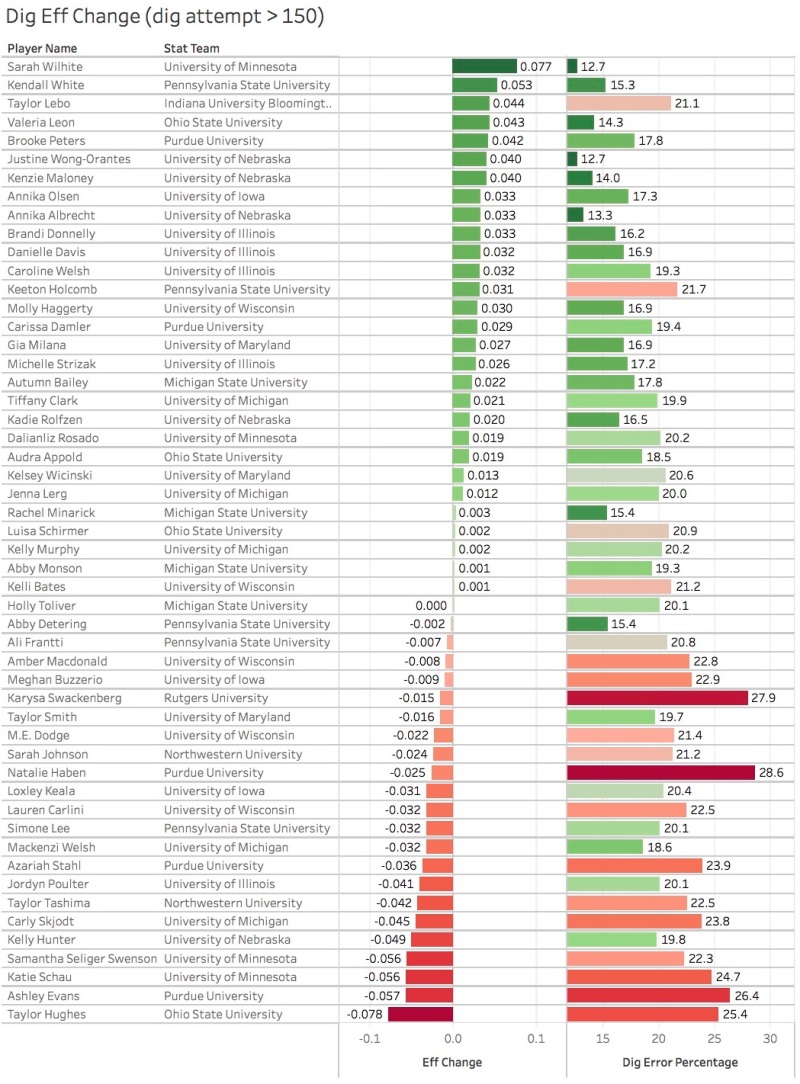 So now what we’re looking at is the ranking of the average eff change each player brings per dig. Remember that Eff Change is calculated by looking at the context of the situation. For a dig, we look at the quality of the 1st touch for the offensive team, the start zone of the attack, and whether each team is in a 3 hitter or 2 hitter situation (and if there’s a block touch). So if a team hits really well when they get a perfect pass and set the quick in zone3, getting a clean dig on that ball  is a big shift in efficiency. On the other hand, digging a high pipe attack after a poor pass carries much less weight. And again, we look at how well you’re expected to handle a situation and how well all teams playing against your same opponent tend to handle the situation – so we get a better feel for what’s expected.

What’s interesting about the viz above is that the players who add the most value defensively aren’t necessarily the ones who shank the fewest digs. While freaking Sarah Wilhite is just really good at volleyball, the other 3 Nebraska kids we mentioned earlier have fallen outside the top 5 and now other DS/Libero players have entered the mix – the ones we might assume would make the big digs in tough situations.

Personally, I think using Eff Change here helps us ask better questions (dammit Hambly). We see who digs balls that consistently add value to their teams, rather than just asking who keeps the ball in play.